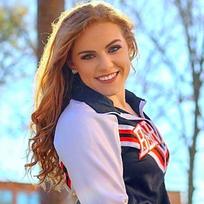 Stephanie Brown is from Friendswood, TX where she danced at Star Steppers Dance. She graduated from Friendswood High School where she was a Friendswood High School Wrangelerette, Officer and Ensemble member. After graduating, Stephanie attended Blinn College, where she earned two associates degrees. During her time at Blinn, she was on the dance team that won a 2018 NDA national championship, and a captain when the team made history with their first NDA double title in the Pom & Team performance categories. Stephanie currently attends Sam Houston State University where she is a member of the Orange Pride Dance Team and is working on a bachelors degree in Kinesiology and a double minor in both Dance and Education. When she is not at school or working for TWDC, Stephanie is an active staff member with Crowd Pleasers Dance and Michelle Leagans Power Intensives. Stephanie is very excited about teach with The Woodlands Dance Center.