Erin Ellis is a dancer, choreographer, and dance educator from Austin, TX. She uses her training within modern, jazz, tap, Bartenieff Fundamentals, ballet, and precision dance to inform her movement and teaching. Erin attended Kilgore College, where she was a member of The Kilgore College Rangerettes. As a Rangerette, Erin was granted many incredible performance opportunities, including the Cotton Bowl Classic, opening the State Fair of Texas, the Contest of Champions in Orlando, Florida, Houston Texans NFL game halftime, participating in the 75th commemoration of the attack of Pearl Harbor, the 90th anniversary of the Macy's Thanksgiving Day Parade, and Rangerette Revels. She was also a Swingster and Revels soloist. While in Kilgore, Erin received her Associate of Arts. She was the Vice President of the Kilgore College Dance Department Dance Club and a member of the department's modern company, Industry, led by Angela Aulds.  In 2017 she began working for Marching Auxiliaries Dance Camps and Competitions. With Marching Auxiliaries, Erin has choreographed, taught, and judged dance competitions and camps across the United States.  Erin received a Bachelor's in Dance Education at Texas State University and taught at various studios in the greater Austin area. She danced and performed with The Dance Project, a local performance company. Erin was a member of Texas States Dance Divisions modern company, Merge, led by Ana Bear and Christa Oliver. Being a member of Merge hosted a variety of learning opportunities from residencies, including but not limited to: Roxanne Gage, ARCOS, Body Shift, and Rosely Conz. At Texas State, she performed in pieces choreographed by Ana Bear, Christa Oliver, and Amanda McCorkle. She has also worked with Kaysie Seitz Brown in pursuing research on teaching students deemed at-risk social-emotional skills through creative movement. She has attended and performed the regional American College Dance Association and Texas Dance Improvisation Festival, having the opportunity to learn from experts in the Modern and Improvisation communities. Her choreography has been featured in the Austin Dance Festival and received countless awards at Drill Team and studio-based competitions. Erin is currently pursuing her Master of Fine Arts in Dance at Sam Houston State University. 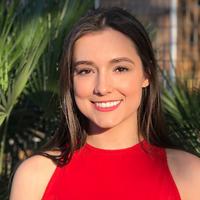